Is the Country’s Tallest Ferris Wheel a Let Down? 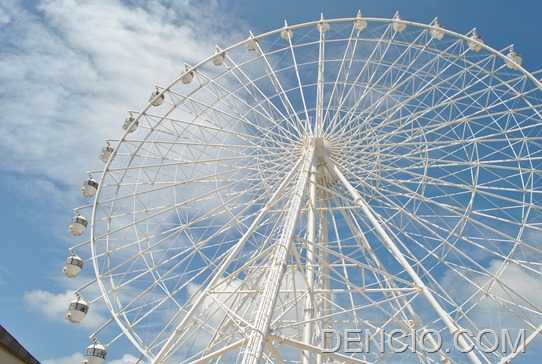 I was really excited upon hearing the news that the tallest Ferris wheel is already open in Sky Ranch Tagaytay City. I immediately invited my friends to visit Tagaytay and try it out. So one week after the opening date, we headed to Tagaytay City. This tallest Ferris wheel is located Beside Taal Vista Hotel inside SM Land’s Sky Ranch which houses the Sky Fun Amusement Park which operates the Wheel. Upon reaching the “Amusement Park” I immediately noticed that the place was still under construction in fact, there were ongoing construction on some areas. The parking area was not yet that fully operational but we managed to find a spot. Now the fun begins… By the way, even though the parking area is not yet fully operational you still have to pay 50 pesos to park.

Anyway moving on.. The adventure begins! 🙂

Before you can get into the Sky Ranch amusement park, you have to pay P50 pesos entrance fee per person. P50 is their promo rate since the regular entrance fee is P100. 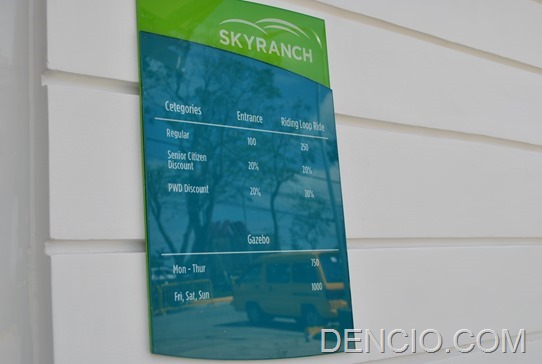 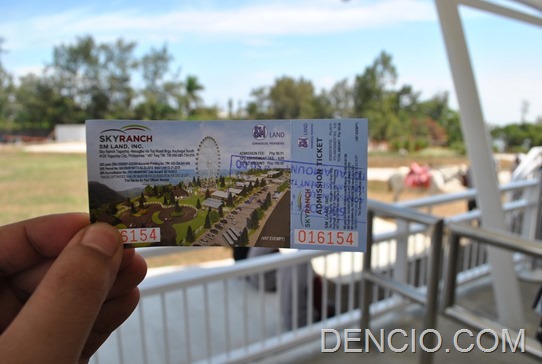 Upon entry, You will be greeted by these cute horses which looks so sad and tired because of the scorching noontime sun. After the horse back riding area you will enter a sort of “peryahan” area where there were some dull looking rides and food stalls. There were also some gazebos that are for rent if you have kinds and want to stay longer. 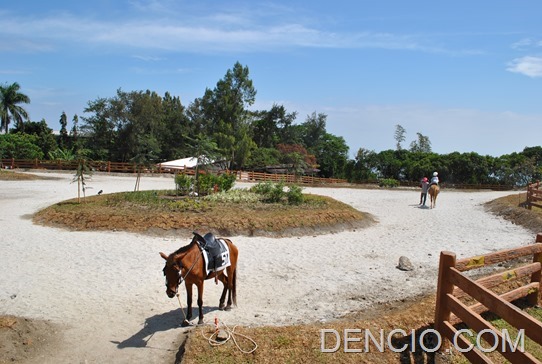 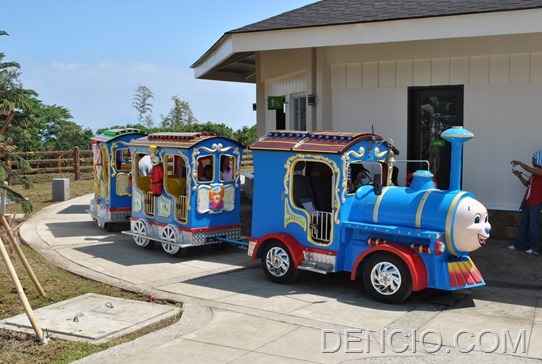 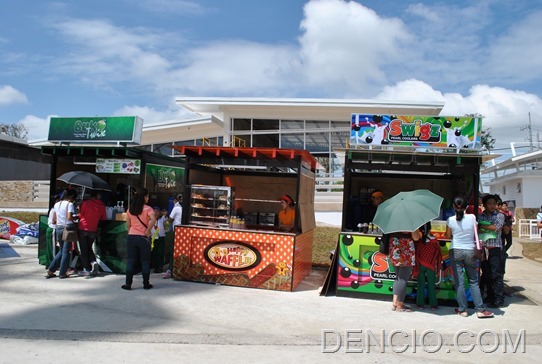 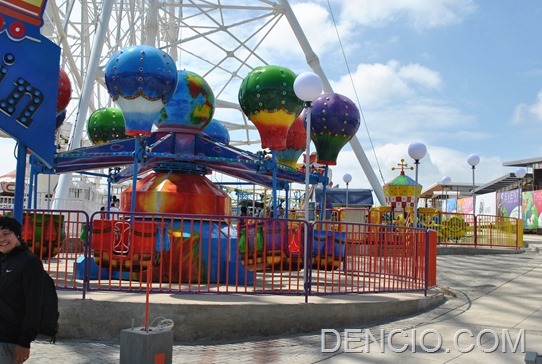 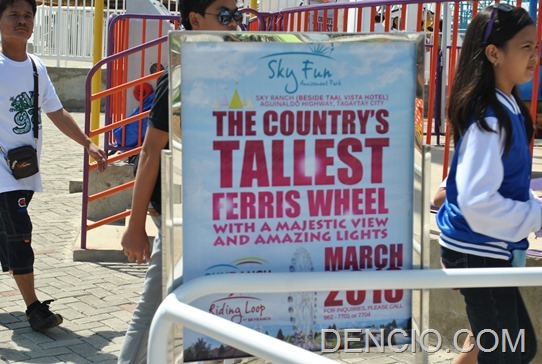 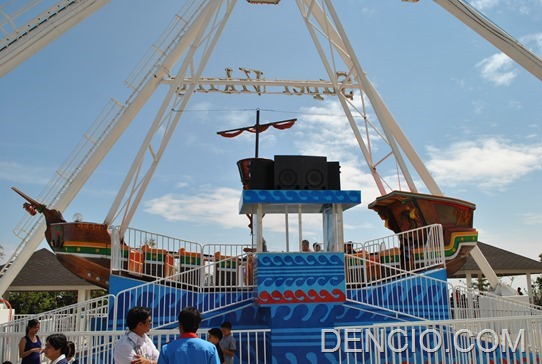 There was no ride all you can ticket. You have to pay per ride. (The biggest chubibo is the Sky Eye) 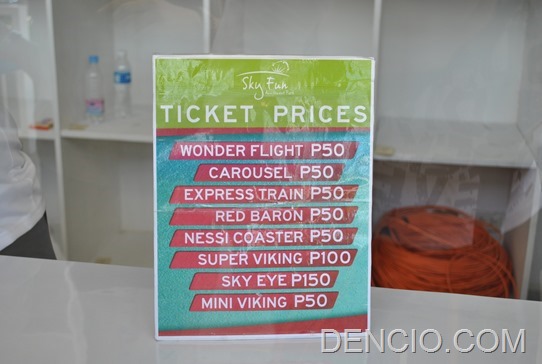 Now, the main attraction inside the Sky Ranch… Tagaytay’s Sky Eye: Tagged as the Tallest Ferris Wheel in the Philippines, it looks super fun from the outside. Although at the back of my head I was picturing something similar or something close to the Singapore Flyer. But I was wrong, that was just too much expectation.

Upon paying P150 for the single ride ticket, you have to queue up under the sun to wait for your turn. One cabin can accommodate up to 3 adults or 4 kids. It was smaller that it seems. Considering that this Ferris Wheel is supposed to be new and has only been in commercial operation for a week (during that time), I was really surprised how dilapidated it looks from the inside. The fiberglass window which was supposed to provide a stunning view of Tagaytay, Taal Volcano and Taal lake was cloudy, scratched and smudged. Each cabin has its own “household” air-conditioning unit. This may be enough during late afternoons or the “burrr” months but for a summer mid-afternoon ride, it just can’t cope with the heat (the cabin is entirely made of steel). We had to open the window to let some air in. Oh, the window, Que horror! Rusty window latch. The rubber gaskets that supposed to hold the fiberglass is dirty and looks super old. The entire interior of the Ferris Wheel looks super cheap! As in “Perya Level”. Here are some photos… 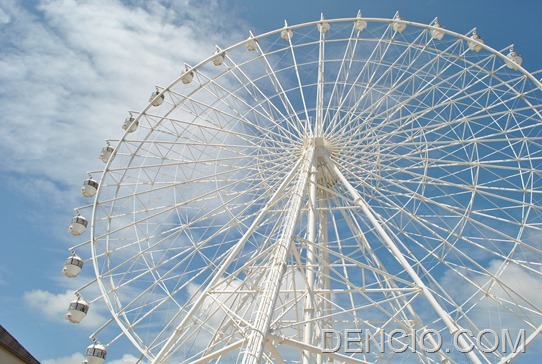 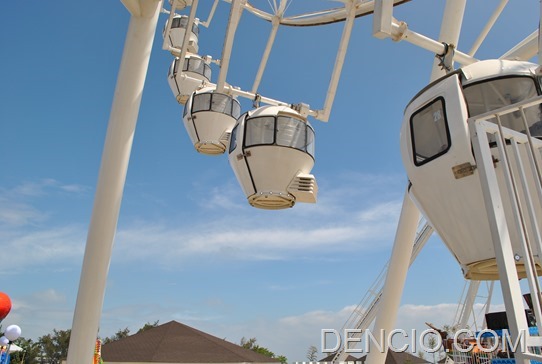 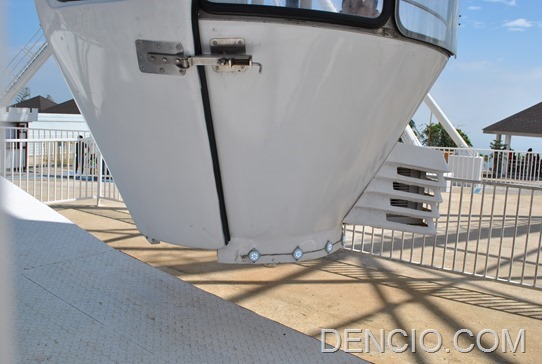 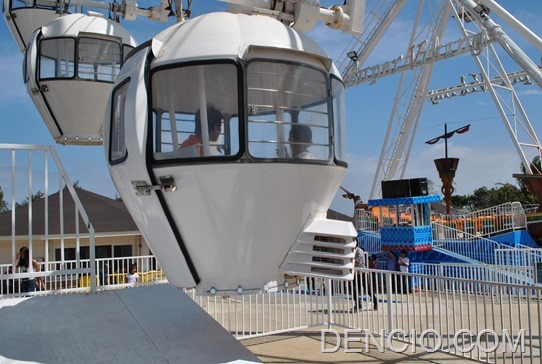 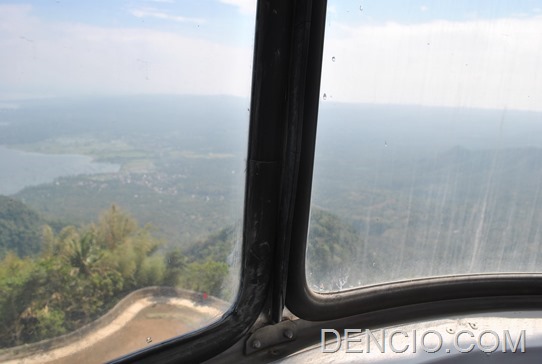 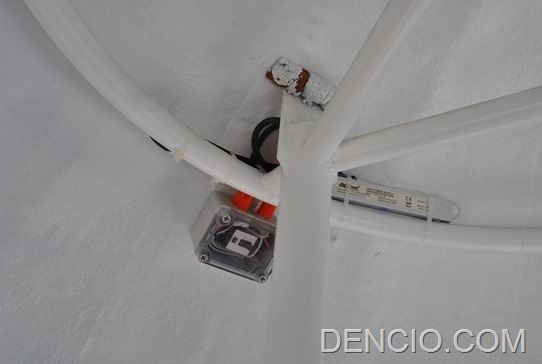 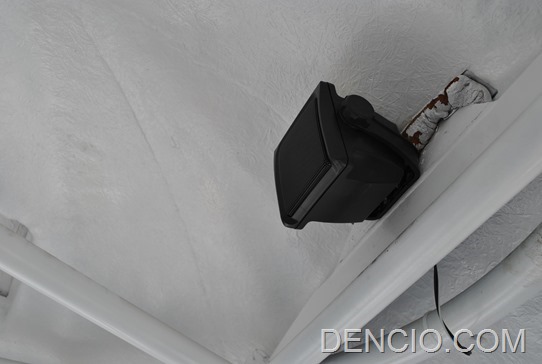 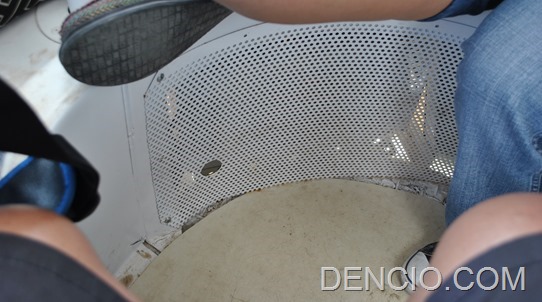 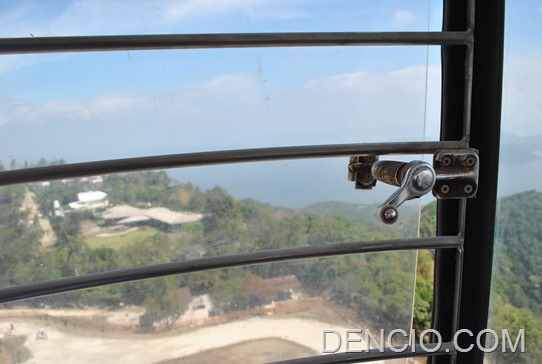 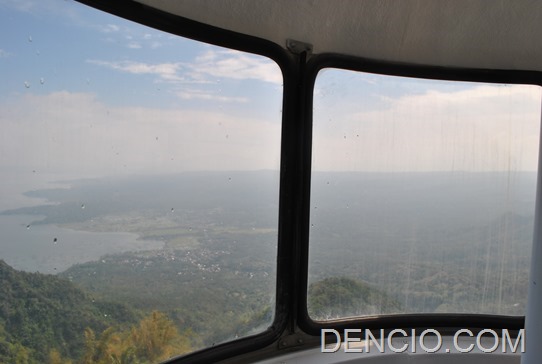 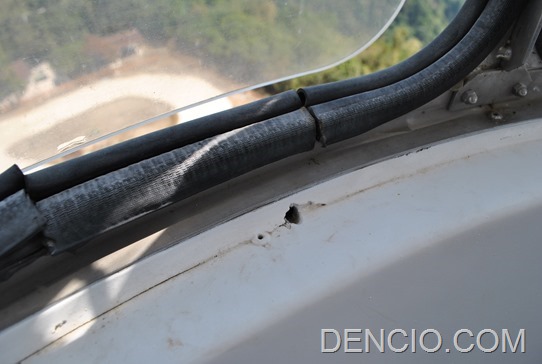 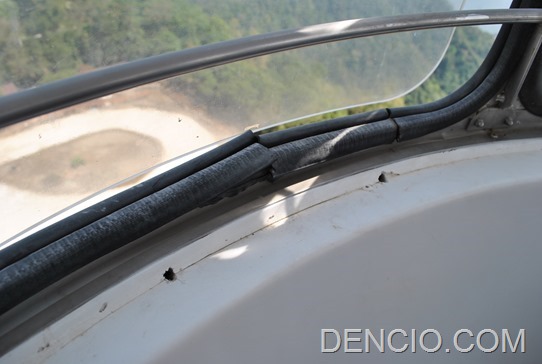 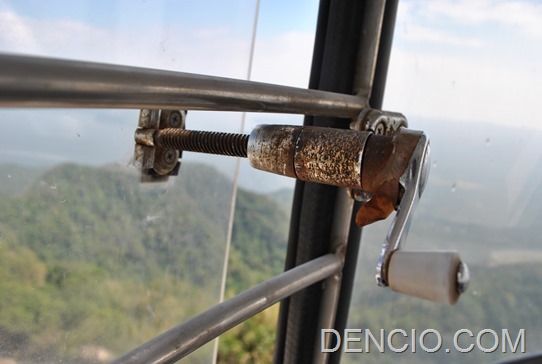 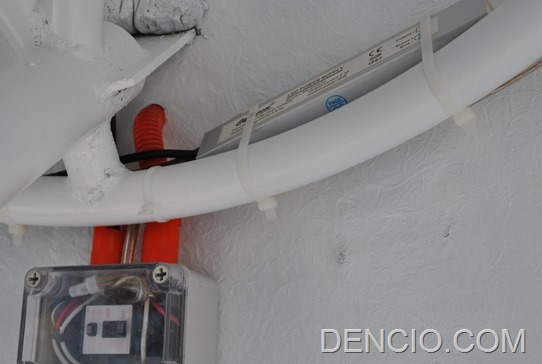 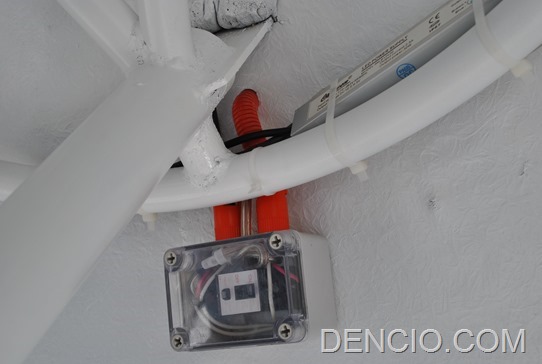 It was so disappointing. Imagine if you drove all the way to Tagaytay just to experience this? I know some of you will say that this ride is for kids and kids won’t probably notice, well It is still totally up to you. 🙂 The ride costs P150 and the wheel goes around for about 10 minutes. Upon touch down, I saw the control panel of the Wheel, instructions were written in another language, I am not sure if it was in Chinese or Japanese… I think it is Chinese. I candidly asked the technician if this wheel is brand new (considering how it looks from the inside) he did not directly answer my question. He said that they the wheel was constructed last year have been testing the wheel since then. Hmmm… My personal opinion? I think that is a Refurbished Ferris Wheel from another country. #SegundaMano 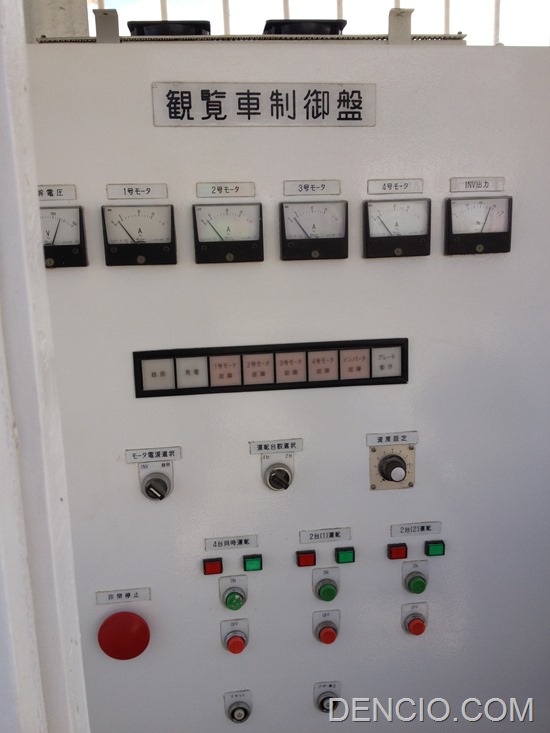 Haaay there goes my hopes and dreams of a World Class Ferris Wheel in our Country. I was not expecting something as spectacular as the London Eye or Singapore Flyer but I was expecting something close enough. Well, it is still the tallest in the country right? Might as well check it out at least once in your life… 🙂 The entire Sky Ranch area is still being constructed. I think they are building a better amusement park for everyone. Let us look forward to that.

Now to answer my question:

Is the Country’s Tallest Ferris Wheel a Let Down? – A resounding YES!

Good thing there’s Bag of Beans and Nuvali Outlet Stores to cheer me up after this disappointing experience. 🙂

4 thoughts on “Is the Country’s Tallest Ferris Wheel a Let Down?”